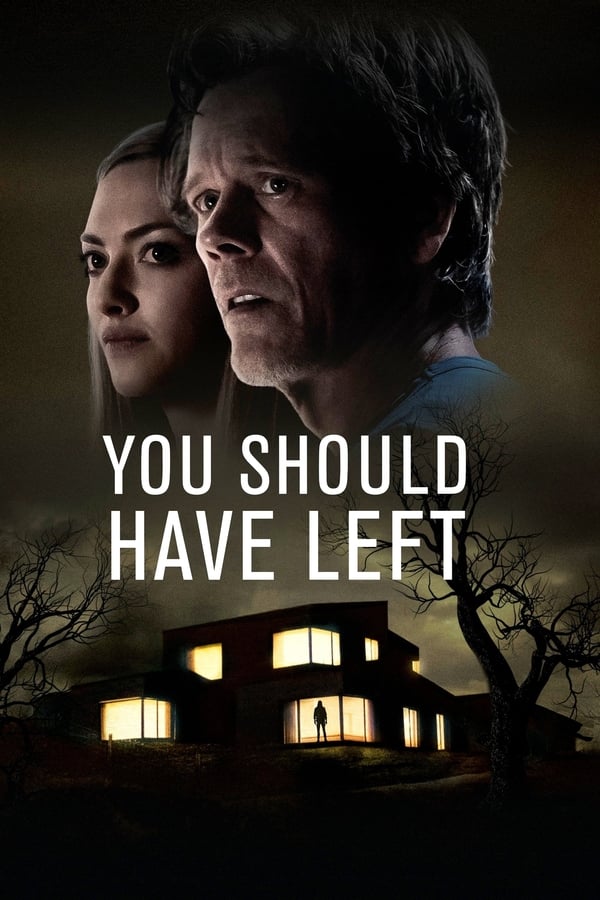 
In an effort to repair their relationship, a couple books a vacation in the countryside for themselves and their daughter. What starts as a perfect retreat begins to fall apart as one loses their grip on reality, and a sinister force tries to tear them apart.

The house finds you

This movie has every ingredient to be a horror hit. David Koepp has written and/or directed phenomenal films: Jurassic Park, Mission: Impossible, Spider-Man, War of the Worlds, Stir of Echoes... the list keeps going. Add Kevin Bacon and Amanda Seyfried, and you've got yourself two fantastic leads. A horror flick set in a "haunted house", where the main characters go through some sort of a psychologically disturbing journey? The synopsis convinces me! So, with all of these features, there's no way this movie will fail, right? Yeah... It couldn't be more disappointing.

You Should Have Left ultimately doesn't know what genre it belongs to. Koepp clearly takes inspiration from a bunch of other films (some from his own filmography), completely forgetting to develop the one at hand. Everything about this movie feels unfinished, or, to be completely honest, everything feels like it's just an idea or a concept yet to be explored. Bacon and Seyfried interpret characters far from being persons with motivations, aspirations, or even personalities, especially Susanna, who is manipulated as a mere plot device to make things happen. She's an actress... that's her entire characterization.

As the viewer, I finish the film without knowing a single thing about any character. Theo has some sort of "past" (like every other Blumhouse's main character of a horror flick), which is barely explained in detail. The only moment where some backstory is given to his character is an utterly unbelievable exposition dump between the mother and her daughter. This is the only personal development that Theo receives: an event that happened in his life described in a forced conversation between characters that definitely shouldn't be having it.

Koepp's movie is marketed as a psychological horror film, but it doesn't even possess the necessary technical attributes to be scary or suspenseful. The "haunted house" looks way too bright, modern, and not claustrophobic at all. The editing (Derek Ambrosi) is weirdly out of sync with the score (Geoff Zanelli), and despite Angus Hudson's cinematography boasting a few nice shots, it doesn't really help to create the necessary atmosphere. It just doesn't look nor feels like a horror film. Just like with the characters, Koepp doesn't know where he wants the story to go.

There's an attempt at creating a drama within the family that doesn't work because, well, there are no *characters*, so I couldn't care less about their arguments. Then, an unnecessary sci-fi element is introduced, and it's bafflingly left unexplained. Finally, a mystery surrounding the house's size is approached, but just like the rest of the movie, it doesn't go beyond its concept. In fact, this is the most captivating aspect of the whole film, but it's only introduced after one hour of runtime. This movie tries to follow so many different paths genre-wise that it forgets to actually choose one...

Overall, You Should Have Left had tremendous potential to be a genuinely intriguing psychological horror flick, but David Koepp gets lost in the many ideas present in the film. Kevin Bacon delivers an excellent performance, and Amanda Seyfried (underused) also lends her undeniably talent, but both interpret characters far from being so. Koepp's screenplay holds so many underdeveloped concepts and extremely superficial attempts at balancing distinct genres that it totally forgets to actually tell a convincing story with complete character arcs and interesting plot points. Even technically, its well-lit, not-scary-at-all house doesn't generate a suspenseful or spooky atmosphere. The editing and the score are also weirdly put together. Unfortunately, it's underwhelming and disappointing. I can't really recommend it.